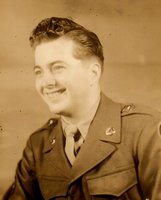 EAST ROCHESTER - Passed away August 4,2021. He is predeceased by his parents, Joseph and Anna Herko, his siblings, Pearl Boch, Elaine Herko, and Robert Herko, brothers-in-law, Joe Boch and Jerre Tyree, step-son, Brian Salter; Arnold is survived by the love of his life and best friend,Gail E. Johnson, sister, Carol Tyree, brothers, Howard (Marylou) and James (Janet) Herko; special godson and nephew, Neal (Shannon) Herko, many nieces and nephews and godchildren, Mark Boch, Jerry Bastian, Cindy Harris, Patricia Oriel, Randy Phelix, and Robert Herko. Family and friends may call at Harloff Funeral Home, 803 South Washington Street, East Rochester on Sunday, August 8 from 1-5 pm. Arnold’s Funeral Mass will be celebrated on Monday, August 9 at 12 noon, St. Jerome’s Church, 207 Garfield Street, East Rochester. Entombment will be at White Haven Memorial Park. In lieu of flowers, kindly consider donations to the Veteran’s Outreach Center in his memory. He saw combat during the Korean War proudly serving in the US Army from March 21, 1951-February 26, 1953. During that time, he was awarded three medals. He received the Korean War Service Medal for operations in the Korean War with two Bronze Stars. After he served thirty consecutive days in Korea, he received the US Army Service Medal, the Campaign Medal and Foreign Award. A United Nations Service medal was given to him for being a part of the allied forces in Korea, and for his service to the U.S. Army, he was awarded a Good Conduct medal. From October 9, 1962-October 22, 1968 he proudly served the East Rochester Community as a volunteer fireman for the East Rochester Fire Department. He will be greatly missed.