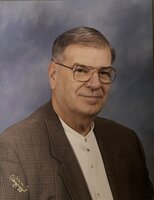 Lawrence “Larry” Helfer was born on September 29, 1932 in East Rochester, the middle child and only son of Dorothy and Larry Helfer. He was an outstanding athlete on the East Rochester High School football, track and basketball teams. After graduating in 1951, he joined the Air Force. He married his high school sweetheart and the love of his life, Audrey VerHow, on November 9, 1952. Their oldest son, Brad, was born while Larry was deployed in Japan in 1953. Rick arrived in 1956 while Staff Sargent Helfer was stationed in Virginia. After leaving the Air Force, Larry joined his young family in East Rochester, where their youngest son, Scott, was born in 1958. Using the technical training he gained in the service, he worked first at Gleason Works in Rochester, and later at EG&G Wright Components in Phelps as a mechanical engineer. While at EG&G, he was recognized for his engineering contributions to the space shuttle program. In his free time Larry coached Little League, and he and Audrey were avid golfers. Family always came first with Larry. He and Audrey never missed their sons’ football games, wrestling matches, or track meets. Driveway basketball games with Dad became a ritual at family get-togethers (but sometimes degenerated into a mix of wrestling, football and basketball). Graduations, weddings, and the birth of granddaughters were among the many reasons for big family celebrations. Grandpa Larry’s joy and pride in his five granddaughters was surpassed, if possible, only by his love for his seven great grandchildren. Larry was loved and will be greatly missed by his wife, Audrey, his sons and their families, and friends from near and far. In lieu of flowers, please consider a donation to the National Kidney Foundation or the nonprofit of your choice.