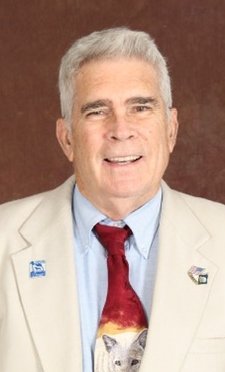 Bill had an incredibly adventurous soul and was never afraid of trying new things. He started his young life with the United States Navy as a Fire Controlman on the USS Macon CA-132. He was a proud American and loved serving his Country. He had many passions over the years and he aggressively pursued them all!

From being President of the Jaycees, Coaching his son’s little league baseball, hockey teams and his daughter’s track team. He was a competitive runner for more than 15 years, including competing in the Master’s Division of the Empire State Games, and the Boston and New York City Marathons. He also made sure to attend all his local grandchildren’s (Will, Grace & Ford) sporting events and taught his grandson Ford how to be a long-distance runner.

Bill and his wife Barbara spent over a decade square dancing in the Happy Hoofers, and the Genesee Dancers where he and his wife served as Presidents. Bill started showing dogs in the 90’s, from there he went on to become a judge for the American Kennel Club, United Kennel Club, and the International Canine Kennel Club. He was on the Board of the Ontario Shores Kennel Club and he fulfilled his role as a Judge up until the end of his life.

In 2004 he started a regular habit of target practice and drove cross country to Nevada to attend formal training at the Front Sight Firearm Training Institute, which he shared with his Grandson Ford several times and his son Scott. These trips took them to the Grand Canyon, Dakota Badlands, St. Louis Arch, Death Valley, Yellowstone, Moab, Arches National Park, and Area 51. Bill loved traveling, including a three-week cross-country trip with the family in the 70’s and he made it to 46 of the United States in his lifetime, not to mention his Navy travels to Europe and the Middle East.

Bill was the Treasurer of the Macon Reunion for many years and was a very active member attending many Navy Reunions which he joyfully shared with his Niece Rachael and his family over the years. One of his greatest joys and proudest moment was being able to attend his Grandson Ford’s Graduation from the United States Air Force Academy in May of 2019, while there he was able to pin Ford’s Second Lieutenant Boards on his uniform and receive his first salute as an officer.

Bill had a gregarious spirit and was always the life of the party!! He would lend a hand to anyone in need and even give you the shirt off his back. His passions were endless, and he had an ardent zest for life, even up until the end. Even though he had been diagnosed with terminal cancer he fought until his very last day. He would tell everyone I'm going to live until 100!! We wish you could have!

A Memorial Service for Bill will be held Friday October 25, 2019 at 9 AM in the All Seasons Chapel at White Haven Memorial Park, 210 Marsh Road, Pittsford. Those wishing may direct donations to the American Cancer Society or the American Heart Association in Bill's memory.

Share Your Memory of
William
Upload Your Memory View All Memories
Be the first to upload a memory!